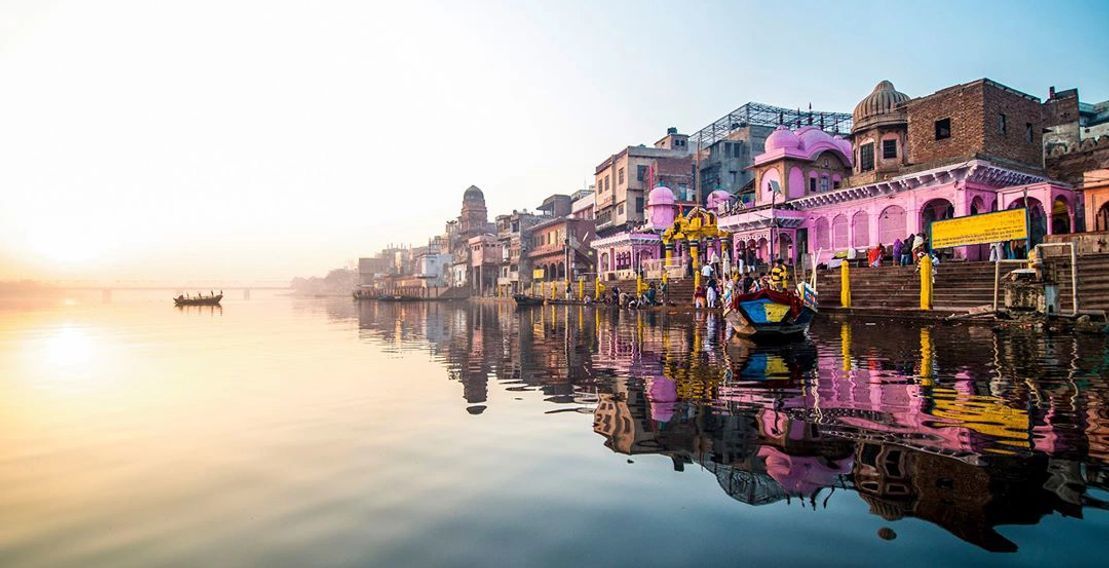 Brij (Hindi: बृज) (also known as Braj or Brijbhoomi) is a region mainly in Uttar Pradesh of India, around Mathura-Vrindavan. Brij, though never a clearly defined political region in India, is very well demarcated culturally. The area stretches from Mathura, Jalesar, Agra, Hathras and Aligarh right up to Etah, Mainpuri and Farrukhabad districts. It is considered to be the land of Krishna and is derived from the Sanskrit word vraja. The main cities in the region are Mathura, Jalesar, Bharatpur, Agra, Hathras, Dholpur, Aligarh, Etawah, Mainpuri, Etah, Kasganj and Firozabad.

Geographically and culturally Brajbhoomi is a part of the Ganges-Yamuna-Doab (ganges valley and upper indus) region, which has had an extensive influence on the entirety of Indian Subcontinent culture. Brajbhoomi falls right in the middle of the Doab. The area was an important part of the Madhya-desha or Aryavarta or midlands.The region lies well within the golden triangle of Delhi-Jaipur-Agra. Covering an area of about 3,800 km2 today, Brajbhoomi can be divided into two distinct units: the eastern part in the trans-Yamuna tract which includes Gokul, Mahavan, Sadabad.

Baldeo, Mat and Manigarhi (Nauhjheel) Bajna; and the western side of the Yamuna covering the Mathura region that encompasses Vrindavan, Govardhan, Kusum Sarovar, Barsana and Nandgaon. Contrary to the popular belief that Braj is Mathura, Vrindavan and Goverdhan alone, this region comprises Mathura district of Uttar Pradesh, Kaman Tehsil of Bharatpur district of Rajasthan and Hodel, Hassanpur of Palwal district of Haryana, and it spans 1300 villages.The land of Braj starts from Kotban near Hodel (about 95 km from Delhi). It covers Agra, Aligarh, Hathras Bharatpur bareilly and Dholpur; in broader terms Firozabad Mainpuri Etah kasganj Etawah and Gwalior Morena Bhind area are also part of Brajbhoomi or Braj Pradesh.

The residents or natives of Braj are called Brijwasi. Braj bhasha or Brij bhasha, closely related to spoken Hindi with a soft accent, is spoken throughout the region.Braj is famous for its sweets and Chaat. Pede from Mathura, Petha from Agra, Soan Papri from Kasganj, maal puye from Nauhjheel, Soan halwa from Raya, chamcham from Iglas, Boora & Batasa from Hathras and Milkcake from Bajna are famous throughout India.Hathras is also known for its sindoor and heeng.

Selection To The 2015 Word Of The Day Of The Year

Krishna (/ˈkrɪʃnə/; Sanskrit: कृष्ण, Kṛṣṇa in IAST, is the god of compassion, tenderness and love in Hinduism. He is one of the most widely revered and popular Indian divinities, worshipped as the eighth incarnation of the Hindu god Vishnu and as Svayam Bhagavan (supreme god) in his own right. Krishna’s birthday is celebrated every year by Hindus on Janmashtami according to the lunisolar Hindu calendar, which falls in late August or early September of the Gregorian calendar.

Krishna is also known by numerous names, such as Govinda, Mukunda, Madhusudhana, Vasudeva and Makhan chor in affection. His iconography shows him in different stages of his life, such as an infant eating butter; a young boy playing a flute; a young man with Radha or surrounded by women devotees; or as a friendly charioteer giving counsel to Arjuna. The anecdotes and narratives of Krishna’s life are generally titled as Krishna Leela. He is a central character in the Bhagavata Purana, the Bhagavad Gita, and is mentioned in many Hindu philosophical, theological and mythological texts. They portray him in various perspectives: a god-child, a prankster, a model lover, a divine hero, and as the Supreme Power.

In Srimad Bhagawat, he himself says to his foster father, Nandbaba that Braj is a culture of forests and hills and not of city. Nowhere in the history of mankind, can one find such an emphasis on the harmony of human life with the environment.

Many international Hindu communities and disciplic successions established temples in the heart of Braj, the holy city of Vrindavan.

Region And Followers Of Lord Krishna

The region is closely related to the Hindu epic Mahabharata. Krishna is said to have spent his childhood and adolescence in Braj and therefore, the region has an important status in Hinduism.

Krishna performed his numerous popularly called his lilas in the 137 sacred forests, at the 1000 Kunds, on the numerous holy hills and on the banks of the river Yamuna.

Thus, the Brajbhasa, the language of Braj was the language of choice of the Bhakti movement, or the neo-Vaishnavite religions, the central deity of which was Krishna. Therefore, most of the literature in this language pertains to Krishna composed in medieval times.

Krishna grew up with Nanda and his wife Yasoda near modern day Mathura. Two of Krishna’s siblings also survived, namely Balarama and Subhadra, according to these legends.Krishna legends then describe his return to Mathura. He overthrows and kills the tyrant king and uncle Kansa, after quelling several assassination attempts from Kansa. He reinstated Kansa’s father, Ugrasena, as the king of the Yadavas and becomes a leading prince at the court. During this period, he becomes a friend of Arjuna and the other Pandava princes of the Kuru kingdom. Krishna plays a key role in the Mahabharata. After the war is over, he leads his Yadava subjects to the city of Dwaraka (in modern Gujarat. In Hindu traditions, Krishna is considered the eighth avatar of Vishnu. Krishna marries and his wife is considered in the Hindu tradition to be an avatar of the goddess Lakshmi. Gopis are considered as Radha’s many forms and manifestations.

Mathura is a city in the North Indian state of Uttar Pradesh. It is located approximately 50 kilometres (31 mi) north of Agra, and 145 kilometres (90 mi) south-east of Delhi; about 11 kilometres (6.8 mi) from the town of Vrindavan, and 22 kilometres (14 mi) from Govardhan. It is the administrative centre of Mathura District of Uttar Pradesh. During the ancient period, Mathura was an economic hub, located at the junction of important caravan routes. The 2011 census of India estimated the population of Mathura to be 441,894.

Mathura is believed to be the birthplace of Krishna which is located at the centre of Braj or Brij-bhoomi, called Shri Krishna Janma-Bhoomi, literally: ‘Lord Krishna’s birthplace’ (Shri Krishna Janmabhoomi). It is one of the seven cities (Sapta Puri) considered holy by Hindus. The Keshav Dev Temple was built in ancient times on the site of Krishna’s birthplace (an underground prison). Mathura was the capital of the Surasena Kingdom, ruled by Kansa the maternal uncle of Krishna.

Mathura has an ancient history and also homeland and birthplace of Krishna who was born in Yadu dynasty. According to the Archaeological Survey of India plaque at the Mathura Museum, the city is mentioned in the oldest Indian epic, the Ramayana. In the epic, the Ikshwaku prince Shatrughna slays a demon called Lavanasura and claims the land. Afterwards, the place came to be known as Madhuvan as it was thickly wooded, then Madhupura and later Mathura.

In the 6th century BCE Mathura became the capital of the Surasena mahajanapada. The city was later ruled by the Maurya empire (4th to 2nd centuries BCE). Megasthenes, writing in the early 3rd century BCE, mentions Mathura as a great city under the name Μέθορα (Méthora). It seems it never was under the direct control of the following Shunga dynasty (2nd century BCE) as not a single archaeological remain of a Shunga presence were ever found in Mathura.

It may have come under the indirect control of Indo-Greeks some time between 180 BCE and 100 BCE, and remained so as late as 70 BCE according to the Yavanarajya inscription, which was found in Maghera, a town 17 kilometres (11 mi) from Mathura, the opening of the 3 line text of these inscriptions are in Brahmi script and were translated as: “In the 116th year of the Yavana kings…” However, this also corresponds to the presence of the native Mitra dynasty, in Mathura, in the same time frame (150 BCE—50 BCE).

After a period of local rule, Mathura was conquered by the Indo-Scythians during the 1st century BCE. The Indo-Scythian satraps of Mathura are sometimes called the “Northern Satraps”, as opposed to the “Western Satraps” ruling in Gujarat and Malwa. After Rajuvula, several successors are known to have ruled as vassals to the Kushans, such as the “Great Satrap” Kharapallana and the “Satrap” Vanaspara, who are known from an inscription discovered in Sarnath, and dated to the 3rd year of Kanishka (c. 130 CE), in which they were paying allegiance to the Kushans. Mathuran art and culture reached its zenith under the Kushan dynasty which had Mathura as one of their capitals, the other being Purushapura (modern-day Peshawar, Pakistan).

Faxian mentions the city as a centre of Buddhism about 400 CE while his successor Xuanzang, who visited the city in 634 CE, mentions it as Mot’ulo, recording that it contained twenty Buddhist monasteries and five Brahmanical temples. Later, he went east to Thanesar, Jalandhar in the eastern Punjab, before climbing up to visit predominantly Theravada monasteries in the Kulu valley and turning southward again to Bairat and then Mathura, on the Yamuna river.

The city was sacked and many of its temples destroyed by Mahmud of Ghazni in 1018 CE and again by Sikandar Lodhi, who ruled the Sultanate of Delhi from 1489 to 1517 CE. Sikander Lodhi earned the epithet of ‘Butt Shikan’, the ‘Destroyer of Hindu deities’. The Mughal Emperor Aurangzeb, built the Shahi-Eidgah Mosque during his rule,which is adjacent to Shri Krishna Janmabhoomi believed to be over a Hindu temple. In 2016, 24 people including 2 police officers were killed in the Jawahar Bagh clash, when the police tried to evict a large number of squatters from the public park.